From  piazza Santo Stefano we get inside the Quadrilatero area an area of artigianal ancient tradition, commercial and mercantile, that had its most development in the Middle Age.

This is the place where the principal corporations of professions in the city.

At the beginning of the Nineteenth Century, the heart of the Quadrilatero has become the centre of sales activities, in the Middle Age, that were then spread mostly in the narrow road so called Mercato di Mezzo, that later become the reconstruction of Via Rizzoli.

In this area you will find, in particular, jewelry stores, butchers, fruit and vegetable’s stands, bakeries, typical gastronomical stores, and other artisan’s and commercial activities of a long tradition. 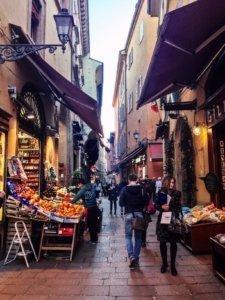 Exiting the Quadrilatero, along the street near San Petronio (Archygimnasium road) under the portico of Pavaglione, you will see the Archygimnasium  Palace, headquarter of the original and most ancient University in the East, founded in 1088.

Here it is worth to see the Anatomic Theatre the antique classroom where students attended anatomic lessons. Here the bodies were placed on the table in the middle of the room, while a priest from the Inquisition controlled from a small window with a grate that the limits imposed by religion were not exceeded.

The canopy of the desk is supported by two wooden statues, realised in 1734, by the famous sculpturist and anatomist Ercole Lelli. These very statues were called “The Skinned” because they represented the inside of a male body.

The ticket office closes 15 minutes before the Theatre.
Ticket: €3,00