Our trip at the discovery of Bologna begins only few steps away from the apartment, where you can admire the monumental Scalinata del Pincio.

The 28th June 1986 King Umberto I and the queen Margherita celebrated, in front of the an overwhelming crowd,the scenographic staircase that makes the access possible to the Montagnola Park; this staircase was ideated by Tito Azzolini and Attilio Muggia. The construction began in 1893 by order of the Mayor Dallomo and continued for three years afterwards, without interruptions, taking on average 100-150 workers per day. The terrain that had been digged was necessary to fill the pit between Porta S.Isaia and Porta Lame. 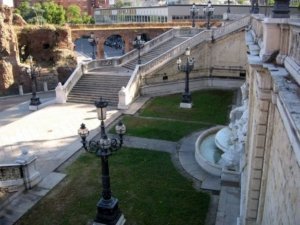 Overall, the work was composed of three parts: the staircaise is decorated with approximately 70 chandelieres, the portico on Via Indipendenza, and the structure of portici along the walls. The central body is composed of two separated fronts, displaying on top a panoramic terrace which is only accessible from the lateral stairs.

The principal front is decorated by two bas-reliefs: the Arturo Colombarini ‘Bologna Docet‘ and the Ettore Sabbioni ‘Bologna Libertas‘. The centre is adorned by a fountain, created by Diego Sarti and Pietro Veronesi, on Muggia’s and Azzolini’s drawing. Our sculpture works around a classical theme, although he does not leave anything to perception that can be related to noble morality; instead he focuses on the evident sensuality of the nymph who is attempting to save herself from an octopus’ tentacles. A seahorse comes to her aid, which with his passion and strenght succeeds in saving her. This work of art is the maximum achievement of a 100 years of local school, starting from work of plaster and mud, to bronze and marble; this represents the phenomenon of progress relative to Bologna and to the Unification of Italy. Sarti places a highly-senxual image in a public place, something that had not happen since the good old times of the prosperous mermaids of the Neptune Fountain in the Sixteenth Century. It will be further vulgarly called ‘the Giant’s wife’, namely the Neptune, and Giosue Carducci will dedicate to her a famous sonnet.

The name derives from the famous roman hill called Pinciano, and also called Pincio. It offers a beautiful view over the city, and the antiquity has been replaced by houses and gardens. After the unification of Italy, we assist to the arrival of many parks spread all over the Country that take the name of the Pincio in honour of the capital. In fact, such as the Roman Pincio, these parks offer a panoramic terrace from which one can access through a monumental staircase.