Let’s continue our trip at the discovery of the marvelous spots of Bologna, with a small curiosity.

Walking along Via Indipendenza, before the crossing over with Via Marsala, we get to the portico of Via Piella.

On the right we find a small window that opens up on a unexpected Bologna, the one with the where its water flow underground, which -up until two centuries
ago- they were uncovered channels.

Looking through the small window the channel that flows between the coloured windows, enables one to live in a Venetian foreshortening. 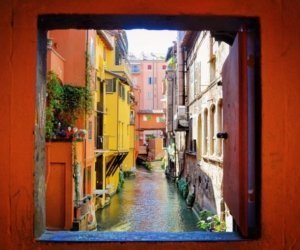