Only 5 minutes away from Via Piella our path continues with a visit at one of the most characteristic neighbourhood of the city, full of shortcuts, suspended passages from a house to another, covered bridge, small doors and windows: this area -enriched with a characteristic medieval vube- takes the name of the charmingEx Jewish Ghetto.

In this part of the city, the Jewish community in Bologna used to live since 1669 and between 1586 and 1593, year in which the Jewish had been permanently expelled from Bologna: over 900 people were forced to abandon the ciy and for over two centuries it was forbidden for Jewish people to live there.
Back at the time, the ghetto was a neighbourhood enclosed between three gates: the first was located at the beginning of Via de’ Giudei, the second in Via Oberdan and the third was situated between via del Carro and Via Zamboni ( where a trail is still visible nowadays): these gates used to be watched 24 hours a day by guards, they were opened at dawn and closed at sunset.

Amongst the most interesting points to visit in the Ghetto, we suggest to visit Piazza San Martino, under the Ugozzoni Tower ( in the alley Mandria, 1), to Sinagoga (road Gombruti, 9), to PalazzoBocchi ( road Goito, 16), to Palazzo Manzoli-Malvasia ( road Zamboni, 14-1 the only access to the ghetto that is still recognisible), to Piazzetta Marco Biagi ( in honor of the professor and labour law scholar murdered in 2002) and obviously to the Jewish Museum.

A curiosity for our guests: jewish people who were passing by Bologna were only able to stay in one hotel, one that today still exists and whose name is ‘Al Cappello Rosso‘, on road Fusari 9. The hotel was called this way due to the red hat that Jewish people had to wear back at that historical time as a mark to be recognised .

Nowadays, the Ex Jewish Ghetto is an area that has been inserted in an interesting urban re-evaluation project, to promote commerce, and raise the value of the central areas but also to make people empathize with the cultural respect for certain locations. 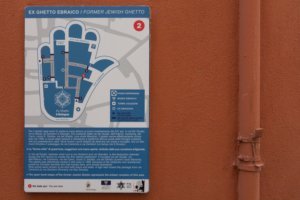 The symbol of this project is a piece of art composed by porcelain tiles which take the shape of an open hand, the Jewish representation of ‘Miriam’s hand’, connected to the five books of Torah.

Other than this, the tiles that you will find hanging on the roads and on the shop’s windows’ banners, they also remiscence the art of craftmanship, of quality handycraft, typical of those professions that were so common in the past, in the antique stores.